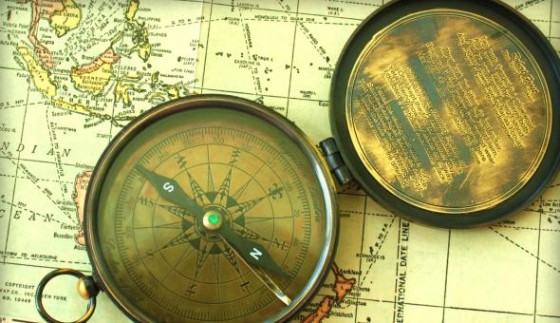 Some people call this an internal compass.

We’re all born with an internal compass. It’s almost fully calibrated…like factory settings on a mobile phone. Of course the problem is that in the early stages of our lives, our parents, teachers, older siblings and other (hopefully) well-meaning adults start messing with the calibration. In some cases they actually do a good thing. They fine tune the calibration and zero the compass in so it’s even more accurate than the factory settings that we started with.

but sometimes, sadly, it’s like these folks wave a huge magnet in front of our compass and foul everything up. I want to say they don’t even realize the damage they are doing. But sometimes I’m not so sure.

For us, what seemed right before is now suspect. We thought we knew where true north was but now…not so much.

We begin to lose confidence in our own internal compass. We’re not sure that the compass really does point north. It may be off. But it might not be. We simply don’t know for sure.

So we stop paying close attention to the compass. In fact, we give up the helm to others. We let someone else call the shots. We acquiesce. We resign.

But even those closest to you don’t know you like you know you. They can’t possibly read or understand your internal compass because…it’s YOUR internal compass. It was designed and calibrated by God specifically for you.

Yes, we should listen to the advice of others. Yes, we should honor those who have gone before. But ultimately, it’s your life. And you are the one who will be accountable with how you’ve lived it.

It’s time to take a closer look at your internal compass. That’s Your. Internal. Compass.

Your. It’s yours and no one else’s. It won’t belong, work or be relevant for anyone else. It was wired into you before you were born. It’s there to guide you.

Compass. It’s an instrument that relies on magnetic north to determine a direction. This amazing instrument measures out all 360 degrees and puts them all into context by pointing the way north. Once you know where true north is…the rest lays out like, well, like a compass.

It’s time for you to take back your compass. Hold it in your hand and feel your connection to it. Look…it points to true north. Now, listen for the Voice. No, not the television show. I’m talking about the voice of the Shepherd. He’s talking to you. You can hear Him if you’ll just be still and listen.

This is your compass and no one else’s. It’s your internal guidance system.