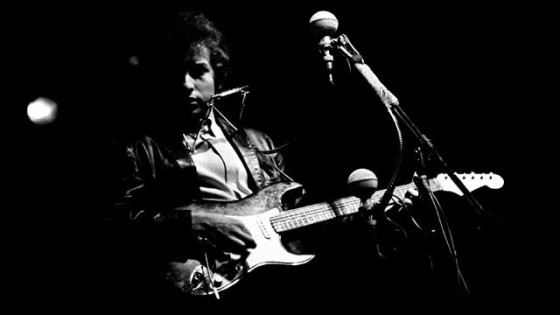 By July of 1965 Bob Dylan had become a significant cultural icon. He was a voice for the unrest and the angst of a whole generation. His melodies and verse put powerful feelings into words. And never forget, words are the things that influence others and spread ideas and bring meaningful change.

But Bob Dylan loved Elvis and rock and roll music was drawing him away from the folk music (and the folk fans) that had made him famous.

Times they were a-changing and Dylan was making the change whether his tribe followed him or not. First of all, in July of 1965, at the height of his folk popularity Dylan released his first rock album “Like a Rolling Stone.” Then just a few days after the album’s release he appeared on stage at the Newport Folk Festival …with an electric guitar and a rock band and was almost booed off the stage. Times are changing indeed.

Dylan said, “When I first heard Elvis’s voice, I just knew that I wasn’t going to work for anybody and nobody was gonna be my boss. Hearing him for the first time was like busting out of jail.”

When I think about Dylan and the influence Elvis had on him I can think of at least three things Dylan can teach us about bold change.

What is the change you know is on your horizon? Any step of change worth taking is worth taking boldly…even in the face of criticism.

Are you ready to take the stage?