You never knew Bruce Springsteen led worship did you?   Just in case you missed that lyric, here it is…

Last Saturday, Shepherd's Fold Ranch (the camp in NE Oklahoma that my mom and dad founded in 1972) celebrated 40

For the first time in many years I sat down the other night to watch the Grammy's. I've never really

Stand for something or fall for anything

February 8, 2012 No Comments on Stand for something or fall for anything

I love this photo that was posted by a couple of friends this morning on Facebook. The photo was taken in 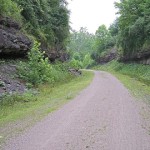 Showing others what you care about

January 16, 2012 No Comments on Showing others what you care about

I was doing dishes the other night (yeah, I do that from time to time) and I noticed the label