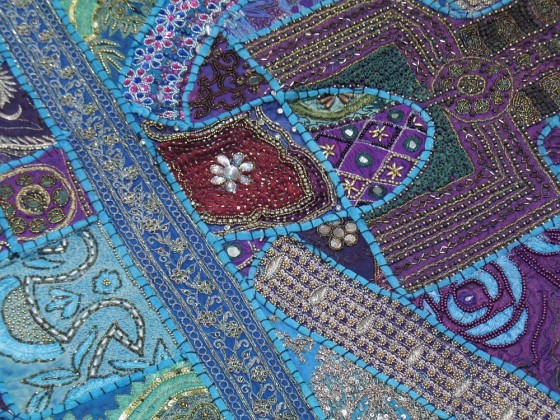 As the man’s dream began, he saw his life, not in glorified strength as he had always thought but in weakness and vulnerability—he saw his life as a single thread; twisting in the wind.

He said, “Lord, how can I be so weak, so frail? I thought you created me for greatness. I thought you made me to make a difference in the lives of others. But this thread—my life—just twisting in the wind…what good can it do? How can it achieve any degree of greatness? How can it help anyone? It can be so easily broken, so easily singed, or snapped, or tangled, or even lost.”

Then he saw the thread, his life, begin to soar. Instead of just drifting aimlessly in the wind, the thread began to move with purpose toward some unseen goal. Something was guiding, directing this small thin thread. Then he saw other threads, other lives, just like his, being directed as well.

At once, the threads came dramatically together, like skydivers forming a figure in mid-air. They began weaving themselves together. He saw himself— his thread—surrounded on all sides—being pulled, pushed, squeezed and tugged. He was being guided by an unseen force; in and around and through the other threads. Gradually, a picture of wholeness seemed to emerge and it became more difficult to discern the individual threads in the piece of cloth. The individuals were lost in the whole.

The cloth, or blanket, was made up of dozens, even thousands of now indiscernible threads and began to float like some kind of flying carpet through the air. It was a rough—strictly business—kind of blanket like you’d see a mover use to protect furniture.

The man was moved to tears by the way this simple, rough blanket brought comfort and peace to so many. The truth came to him in a rush; as a single thin piece of thread, he was weak, he was unable to touch the hurting in any lasting way. But together, knit together and unified with so many it became a natural, even easy thing.

The Lord said, “You are created for greatness. You are made for a purpose larger than your life alone. But you could never achieve this by yourself. I never expected you to achieve these things by yourself. Your purpose is only fully realized when you allow your life to be tightly knit together in and among the lives of others. Your life was never designed to be a single thread…but a thing of beauty.

As the powerful voice spoke this last phrase, the blanket, still held by unseen hands, began to slowly turn. What looked like a simple, rough moving blanket on one side was revealed to be a beautiful tapestry on the other side— a breathtaking piece of art. Each individual thread was now a beautiful piece of a whole picture.

Then the man saw the hand of the Lord take the blanket in his hands and slowly begin to pick at a loose thread, gently pulling until the thread gradually came fully out of the embroidery. At once the beautiful picture depicted on the tapestry began to sag. It immediately began to lose its uniqueness, its striking beauty. One simple, seemingly unimportant thread, when pulled out seemed to change the whole nature of the tapestry. Now, it all seemed so ordinary, so matter-of-fact. No magic, no imagination.

The Lord said, “Do you see how important you are to the whole? Every single thread makes a difference. Every thread has a role to play, a hole to fill. With the loss of even one, the tapestry loses its luster, its shape and form.

This realization brought the man to his knees asking his Maker to forgive him for his small-mindedness, his limited vision. He began to thank the Lord for those people—the other lives—with which he’d become enjoined. He rejoiced at the beautiful tapestry his life had become.