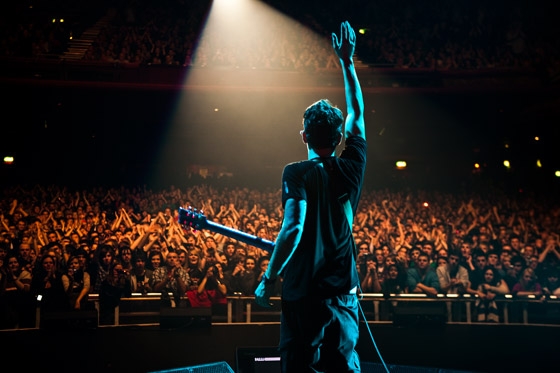 For some reason the Pandora station I’ve been listening to for the past few days has been playing a lot of music that was recorded in front of a live audience.

Normally, I prefer the studio recording but I’m drawn to the energy that comes from the audience in these recordings. There are times when the singer will simply stop singing mid-sentence and you can hear the crowd singing along in the background.

It made me think.

How rewarding is that? How cool to hear the words you wrote being sung by strangers? To hear the words that were once buried deep inside you affect people that way, to move them to the point where they actually sing along. All because you “gave birth” to them and brought them out into the light. Now, we all win. A crowd of people are swaying back and forth, singing the song that used to belong to only you.

I guess that’s one sign that your message is getting through, when the crowd sings your words back to you.

That reminds me of a time when I first arrived at Taconic. I was desperately trying to change the culture, particularly among the CREW who were notorious for finishing their own job (or not) and taking off…even though others hadn’t finished yet. I came up with a mantra right then, “The work’s not done until everyone’s work is done!”

I began repeating that phrase over and over.

One day I was in the kitchen. There were two CREW members in the dish pit. One of them said something like,”Almost done. I can’t wait to leave.” The other chimed in, “No way. We don’t leave until everyone is finished!”

I couldn’t help but smile. The message was getting across. A new culture was coming.

Ideas are great. Inspiration is…inspiring. But when you don’t share them no one wins. Only when you take the time to develop the idea into words, words others can say and sing, do you stand the chance of change.

Write the words. Get the crowd to sing along.