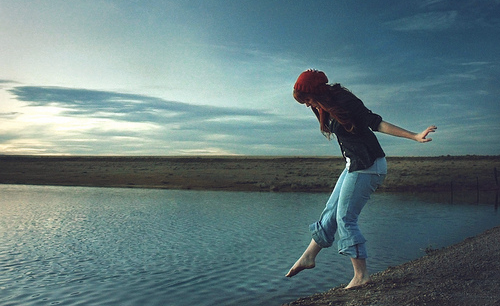 Where does God have you right now? What lessons is He trying to teach you? What is the subject matter of most of the recent lessons He’s bringing your way?

In this new venture of ours, God has us in the classroom of faith and trust. (You could probably tell by reading many of my recent posts!)

Walking by faith is hard! (no duh) It’s tough to know when to move and when to stay; and once determined to move, to know which direction. I’ve been thinking today about the differences in the two “crossings.”

In the first crossing, the Egyptian chariots are bearing down on Moses and the Israelites who are now trapped up against the shores of the Red Sea. They’ve faithfully followed the Lord to this place and now have discovered that they have no escape from Pharaoh’s troops bent on retribution.

I’m sure everything in the Hebrews’ hearts and minds was saying “RUN!” But in the midst of this chaotic and stressful scene, what does God command?

“Stand still and watch the Lord rescue you today!”

Now fast forward 40 years. After decades in the wilderness, Moses has died and Joshua is now ready to enter the Promised Land. They are no longer running from anyone or anything. But I’ve got to believe there’s some hesitancy in the Hebrew ranks to cross the Jordan into God’s promise. I’m sure there were still rumors circling the camp about the giants that live in the new land. I’m sure there were those who would much rather stand still and see God go ahead of them in fire and wipe out all their enemies. But what did God command? When you reach the Jordan, “take a few steps into the river.”

In other words…you need to have some skin in the game. I want you to get your feet wet. Then I’ll move on your behalf and stop the river from flowing. Then you’ll see me move.

Personally, I would love to pray today…as we’re looking for another house and as we’re praying for more clients to coach and more organizations to consult, and more opportunities to speak, that God would MOVE! I would happily stand fast and watch His mighty hand move on my behalf; clearing the fog, parting the waters, revealing my path with His holy finger of fire. I would hear His thunderous voice audibly roar, “This is the way! Walk ye in it!

But that’s not going to happen.

Alas, I’m convinced that my current situation is much more like Joshua’s state than the one Moses encountered. I’m not running from anything. Rather, I’m on the brink of something new, something wondrous and amazing.

I believe that God’s movement is triggered by my movement. Not the other way round.

He’s saying, “Take a few steps then watch me move. I want you to get your feet wet. You need some skin in the game.”

I believe that in this walk of faith of ours God chooses to direct our path, not with blazing fingers of fire but rather with doors and windows that open or close and reveal direction as we move.

After all, it’s called the walk of faith. Not the wait of faith.

A wise man once said, “It’s easier to steer a moving car than one that’s standing still.”

I believe it. I’m going to take a few steps.