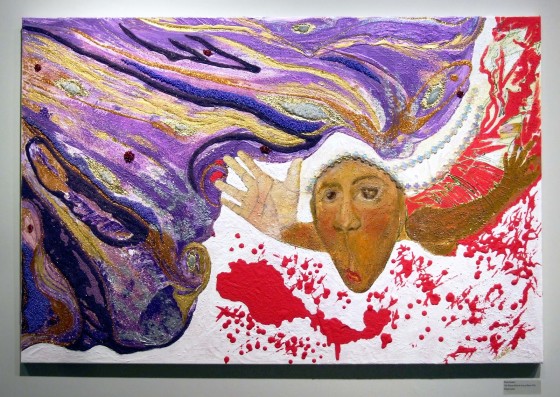 (This is a bit longer than most of my posts but I hope you’ll stay with it. It’s from an article I wrote a few years ago)

Ours is a journey steeped in covenant. “The Lord is my Shepherd.” “He is my rock and my fortress.” “He is the Glory and the lifter of my head.” These are all covenant statements. These are covenant vows. These are things we recite as we hold up our right hands and look into each other’s eyes. These words speak to me of the various roles that God has chosen to play in my life. What he will be for me.

All of these statements confirm in my heart the fullness of his role and the utter emptiness of my own. What is it, in all my humanness, that God can cling to in his relationship with me? I am unfaithful, I am fickle, I am emotional, I am weak—I will fail. In that alone am I consistent. What is it that I can bring to my relationship with God? There is nothing. That’s a hard thing for me to admit.

In the very first ceremony of covenant, God put Abram to sleep and handled everything on his own. Abram slept through the entire affair with only a dark vision of a pillar of fire walking with him between the two bloody halves of their animal sacrifice. When he awoke the deal was done. That’s it, the whole thing in a nutshell. I can’t bring anything to the table. There is absolutely nothing that I can bring to the arrangement that I can hang my hat on. I can’t say, “Look what I’ve done! Look at the enormity of gifts and bounty that I can bestow on my Lord! See? You should really love me now. Look at all I can do for you!” It’s ridiculous to even consider.

But I can’t seem to get a picture out of my mind. A crowded, narrow street. Jesus being pressed on every side, jostled by the crowd. He’s focused intently on making it to a house where he needs to see a small girl who is very sick. I’m sure he’s thinking of what might await him. Suddenly, he feels energy, power, strength—he feels his essence flow out of him. He whirls and asks those nearby, “Who touched me?” The crowd is perplexed. Everyone is touching him. They surround him on all sides. He asks again, “No—who touched me?”

A poor woman, bleeding from some unknown mysterious ailment for many years, lies on the dusty ground before him. Her head is bowed and she is unable to lift her face to look him in the eyes. She has come to the end. She no longer cares that she will be humiliated. She no longer cares that she’ll have to endure the scorn of the crowd for causing such a distraction, such a delay in the critical visit to see the very sick daughter of a very important man.

She’s unable to be fulfilled as a woman, a wife, a mother. Her life has been about this sickness, this disease for so long. It’s become part of her. She’s tried everything. She’s drained whatever savings her family had, taken by doctors over the years trying to heal the unhealable. She has nothing.

But then she is bathed in warmth. She looks up and sees his face; no pity there. Just love. Complete and undeniable love. The crowd fades away in her mind, and the only two people now in the dusty street are her and this incredible man. She rises to her full height and looks the man in the face. She cannot find words to say to him. He knows that. He knows that there are no words at a time like this. He simply holds out his arms and she rushes into his embrace.

He holds her for a long moment. Then, strangely, he thanks her. She pulls away briefly and says, “You thank me?” He smiles. “Yes, thank you. In you I fulfill my destiny, my covenant. It’s your weakness, your sorrow and pain that cause me to be. It’s your humanness that I love, that compels me. It drives me. Do you know how much I love you?”

She knows he’s not speaking romantically and looks down at her hands—no longer shaking. She feels her toes in the dirt, no longer tingling with loss of circulation. She knows he has accomplished with a touch what many doctors over many years could not. Yes, she knows now how much he loves her. And with that he smiles and turns on his heel, once again lost to the current of the crowd.

But the woman is no longer the woman who bleeds—she is now the woman who touched him. The healed woman. Everything is now different. His presence has changed everything.

It’s my need, my weakness, my humanness that actually draws him to me. He is actually attracted to my need for him. He’s not interested in my claims of independence. He is moved by my dependence. The Bible says that in our weakness he is made strong. We know this verse. But do we really get it? Our independence doesn’t do it for him. God is only God in my weakness. He becomes the King of Kings only when I admit that I can’t do anything by myself.

This is covenant. Once we understand the terms—he is everything, we are nothing—covenant becomes real and the blessings come. We only have all of him when we give up all of us.